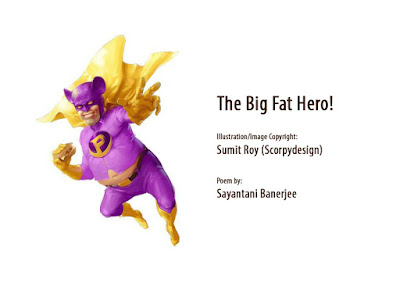 This poem has an unusual creation history. Mr. Sumit Roy, Graphic Designer from Basirhat created this illustrative figure and shared on Facebook Timeline. Upon seeing the illustration the poem instantly came to her mind and Sayantani Banerjee penned it down then and there. Enjoy reading!


There was a man
Who was so plump,
All of us laughed
At his big fat rump.

In his youth
This man was wealthy,
He ate a lot of food
Pure and healthy.
Soon as he became
Strong and sound,
He joined sports
'The best' he was crowned.

But his big
And voracious appetite,
Craved for more food
'Junks' were a delight!
He ate burgers
In his regular diet,
French fries and sweets
And all those not right.

His big fat belly
Much to his disgust,
Became so portly
It seemed to burst!
And then one day
He fell very ill,
We took him to a doctor
Who charged a big bill.

The doctor said,
"You are a foolish chump,
You ate so much rubbish
You've got a massive lump."

Saying so he took up
A large vacuum pump,
And from his big fat belly
Sucked out the lump.

Thus got a lesson
the man so plump,
And we no more laughed
at his big fat rump. 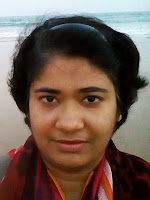 Sayantani Banerjee is by profession a digital marketer and guest blogger and loves to write on various subjects like fashion, lifestyle, digital marketing, psychology, personal development, etc. She writes in Bengali and English language.

Our Most Popular Stories!